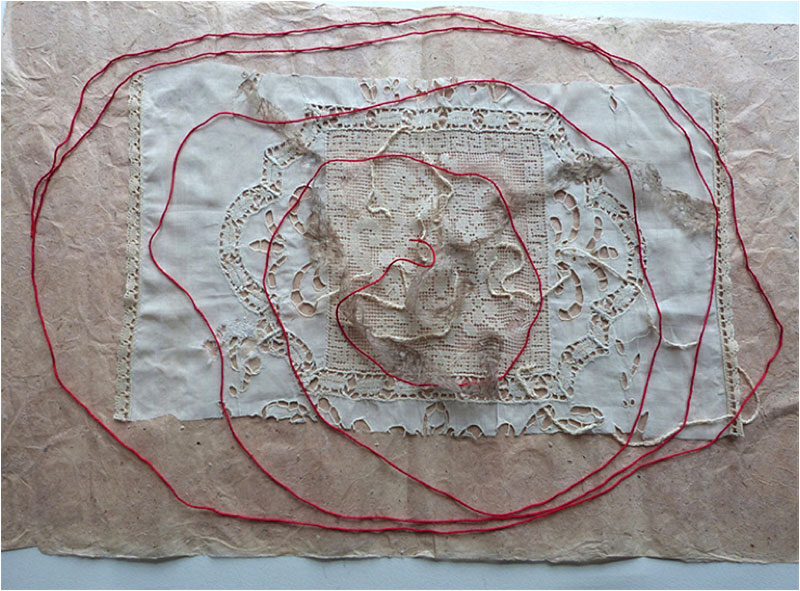 […] what really matters is neither the sociology nor the biology of ageing – but the narrative of the self. The stories we tell ourselves of how to be our age as we age. How are we to live our lives?

Segal’s words hold resonance for us all as we confront the challenges and rewards of ageing in today’s society. Looking through the lens of an older woman artist’s self-reflexive study, the subjectivity of transitioning, relinquishing and becoming is explored through creative practice and self-confrontation. This immersive process has revealed ways in which a path towards a re-representation of the self might evolve. Situated within the specific time frame of 2012 – 2015, and with the author’s creative process at its core, the study considers the roles culture and society play in our self-pre-conceptions of the ageing self. Our fixation with youth and vigour is often at the expense of more than just the vast amounts of money spent on trying to retain this unrealistic appearance; it has far deeper implications.

There is a global shift in life expectancy, and individual countries are struggling to find ways to fund this while retaining some degree of quality of life for the older population. Ageing is not an illness. It is a natural state of being and if we are to avoid establishing negative preconceptions which subsequently impact on our health and wellbeing (Levy, 1996; Levy, Slade and Gill, 2006; Levy and Leifheit-Limson, 2009), stereotypes of ageing need to be overcome. If left unchallenged, some of our presumptions of ageing can lead to self-fulfilling prophesies as we approach our own old age.

As part of the exploration of the experience of her early 60s, the author uses a bricolage of visual and textual methodologies to investigate her creative process in relation to her sense of ageing, focussing on autoethnography, writing the self, and the use of collage and heuristic inquiry as modes of thinking. Over time, this form of immersive self-examination has the capacity to change both the writer and the writing in that, what becomes known, cannot then be unknown. In revealing, acknowledging and accepting the vulnerable self, the author connects her writing of the self with the ageing narratives of others and in so doing, establishes not only a space for discourse but also creates the potential for social change. In particular, it was found that the combination of the visual methodologies of collage with artistic heuristic inquiry, offered valuable insight into the interrogation of the ageing experience of the author which in turn, led the way towards the final artwork; the textile installation ‘Departing Selves’ and the video; ‘Re – connect’.

The author also considers the ways in which the act of making with textiles as a creative medium, helps to inform how we understand ourselves and our place in the world. In so doing, she is able to employ craft thinking skills and sensory knowing in order to work with the materials, thereby adopting the role of a reflective practitioner (Schön, 1991). Creating the artwork itself was unexpectedly challenging for the author and it was found that the use of Whitbourne’s Identity Process Theory (1986) as a critical frame for analysis both during and after the making process, offered an essential scaffold, one which ultimately led to a deeper appreciation of her experience of the ageing self.

The research has revealed how entrenched ways of thinking can have a negative impact on one’s physical and psychological sense of the ageing self. However, it was found that through persistently opening up to an experiential unknown, the creative process has the capacity to offer new ways of self-understanding. This can give rise to a heightened awareness of being in and of the World.

The main contribution to knowledge of this research is to add to the discourse on ageing by offering insights generated through creative practice, namely; a reconceptualising of the role of agency in both creative practice and ageing as a coming to terms with self- acceptance, as experienced through the interaction with materials.

The full thesis; ‘Exploring the Embodied Experience of Ageing through Creative Practice’, may be downloaded from: https://independent.academia.edu/alisonbell19/